It is hard to know where to begin, the whole tour is a highlight of highlight tours combined with the study of the travels of Paul and the Apostles.
Here is an overview of what you will see and experience: 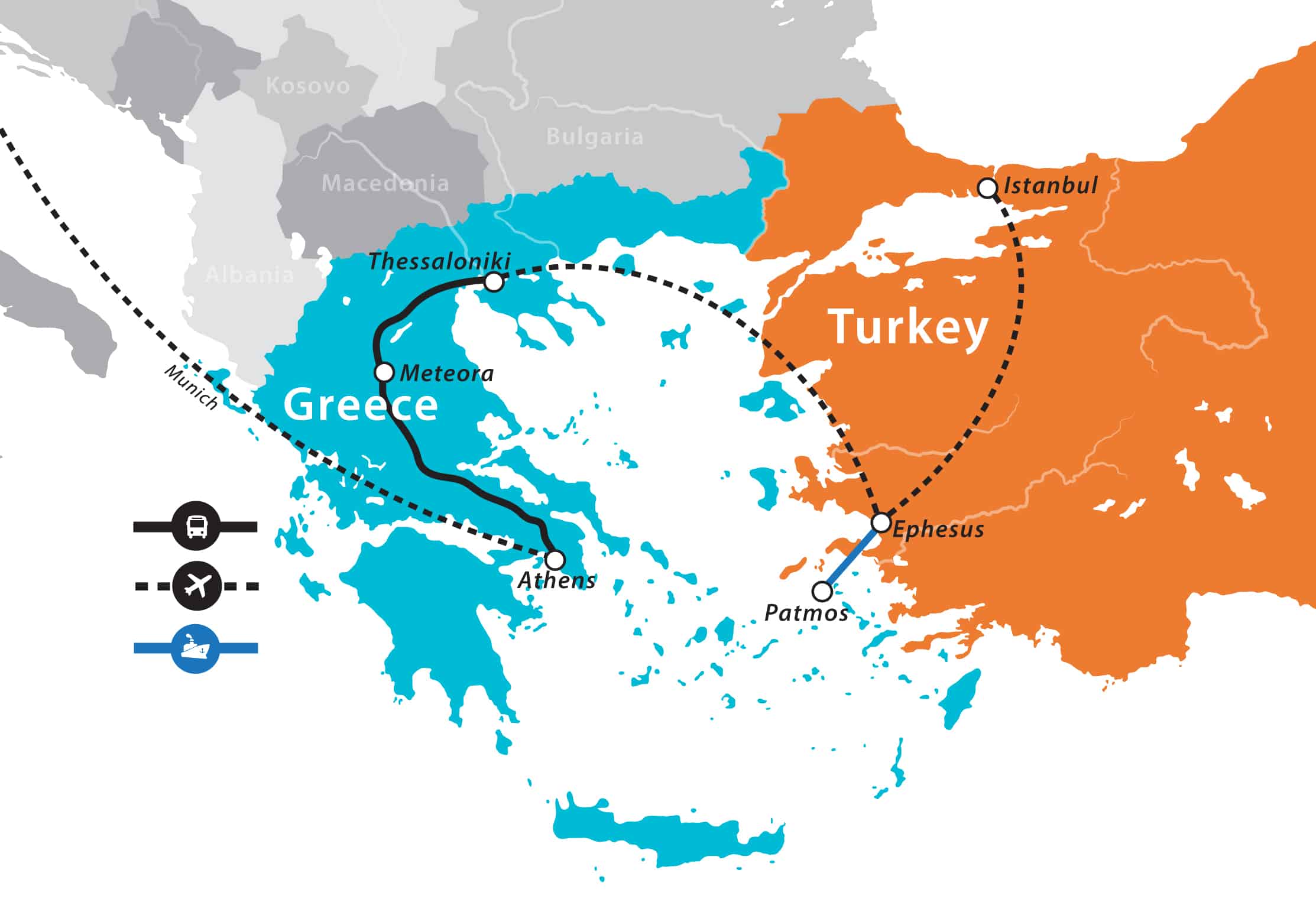 *Per person cash discount price, based on double occupancy.
Does not include airfares, visas or tips.

This is a partial list and is subject to change as needed to accomplish everything we can in each area we visit. We will have local guides who will make sure we see the very best in the time we have.

Day 1: September 5: Fly to Munich
We depart our home and travel to Munich.

Day 2: September 6: Munich
After arriving into Munich we will do a city tour of Munich. Overnight Munich.

Day 3: September 7: Munich – Salzburg
This morning we will drive 2 hours to Salzburg, Austria. We will spend the time touring Salzburg. While in Salzburg you may feel as if you have slipped into “The Sound Of Music.” Late this afternoon we will drive back to Munich.

Day 4: September 8: Munich – Oberammergau
This morning we will travel into the German Alps. Where we plan, if possible to visit Neuschwanstein Castle, which was the inspiration for Disney’s “Sleeping Beauty Castle”. Then we will go to Oberammergau where we will be staying for the next two nights.

Day 5: September 9: Oberammergau
This morning we will drive to the Linderhof Palace. Then we will return to Oberammergau where you will be able to have some free time to explore this quaint village.

Day 6: September 10: Munich – Athens
Today we will fly from Munich to Athens, Greece. After clearing customs we will visit the Acropolis and Mars Hill (where Paul taught).

Day 7: September 11: Athens – Corinth
This morning we will head to Corinth. Your tour will include a photo stop of the Corinth Canal, Corinth. Later we will return to Athens to finish touring.

Day 8: September 12: Athens – Meteora
Today we will drive around 4.5 hours to monasteries of Meteora. These monasteries are perched on high cliffs and are accessible by staircases that are cut into the rock formations. They were created to serve monks and nuns in the Eastern Orthodox Church.

Day 9: September 13: Meteora
Today will be an amazing day visiting the monasteries of Meteora.

Day 10: September 14: Meteora – Thessaloniki
This morning we will drive around 3 hours to Thessaloniki. Upon arrival, we will visit this ancient city. Paul came here on his second mission and preached in Thessaloniki’s synagogue, the main one in this area at the time. We will overnight in Thessaloniki.

Day 12: September 16: Kusadasi – Isle of Patmos
Early this morning we will take our private boat to Patmos in Greece to visit and explore the Island of John the Revelator. We will return this evening back to our hotel in Kusadasi.

Day 13: September 17: Ephesus
Today is another highlight day as we visit Ephesus and the surrounding area. We will start with the house of the Virgin Mary on top of Bulbul Mountain and then proceed to the ancient city of Ephesus where you will explore some of the best-preserved theaters, fountains and buildings found anywhere in the world.  Late this afternoon we will fly to Istanbul.

Day 14: September 18: Istanbul
Our tour today will include the magnificent Hagia Sofia, Hippodrome, and the stadium of ancient Byzantium, where an Egyptian obelisk and bronze sculpture of the entwined serpents from Delphi still survive. We then continue to the Blue Mosque which owes its name to the exquisite tiles adorning its interior. In the afternoon, we will visit the amazing Topkapi Palace, which from the 15th to the 19th Century was the principal residence of the Ottoman Sultans. Overnight Istanbul.

Day 15: September 19: Istanbul
We will start the day with a boat ride on the Bosphorus, the water that separates Asia from Europe. Istanbul is both in Asia and Europe. We overnight in Istanbul.

Day 16: September 20: Fly Home
We will head to the airport this morning for our flight back to the US and home.