#1 Why this is the last time: Many Galapagos Cruises have 100 passengers on board. We have chartered a 100-passenger ship, but have limited our number to 48 passengers. The ship company has not been willing to work with us related to our needs in the number of passengers and the pricing after 2023. If we can’t get what we need for our passengers, we would rather not bring our groups. We understand they can make more money selling to more individuals. With us not being able to charter, we will not be returning after 2023.

This is your last opportunity to experience Galapagos with Michael Wilcox and Fun For Less Tours. 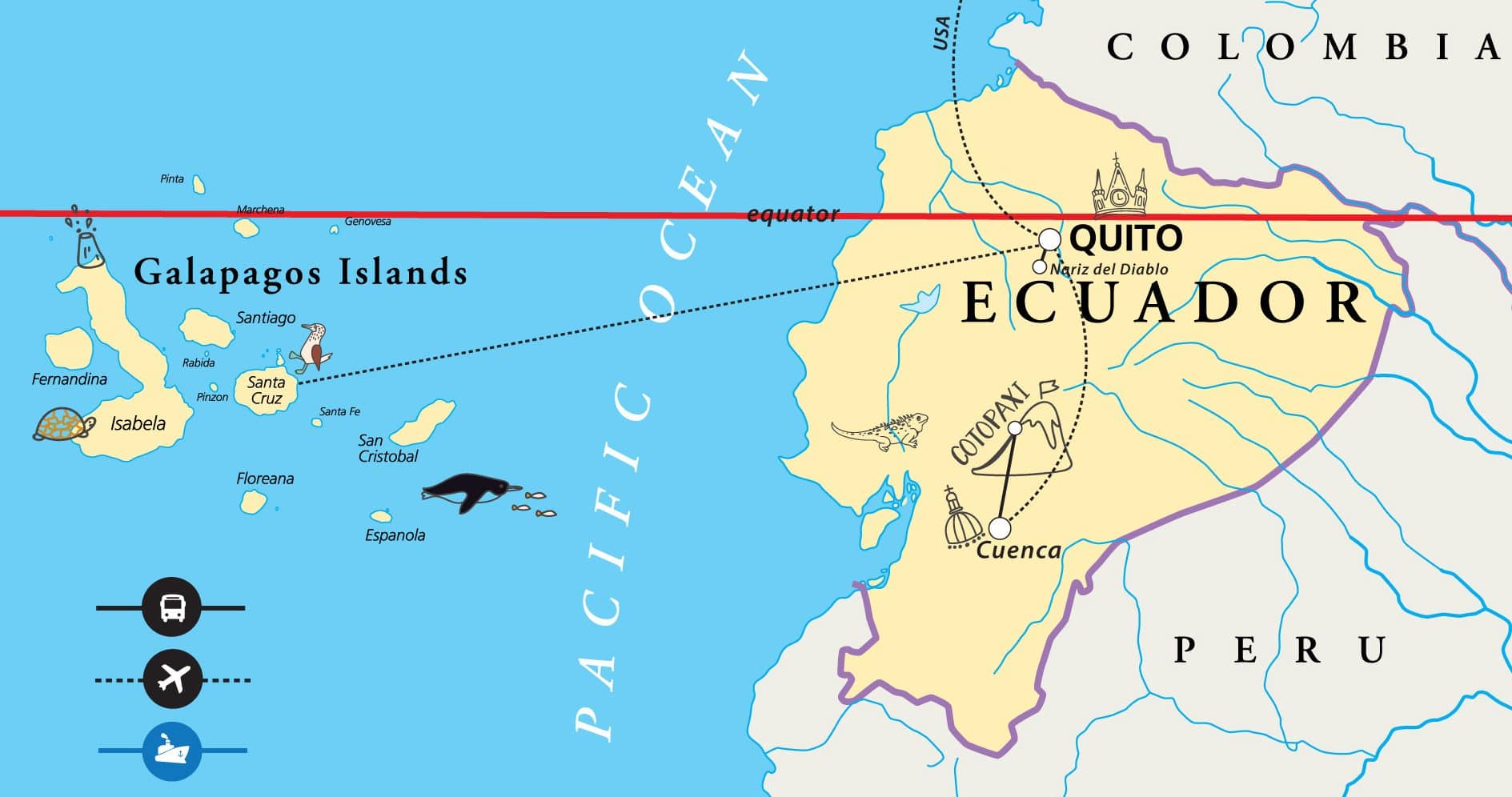 OUR GIGANTIC ADVANTAGE: The number of passengers on a ship can limit the number of shore excursions and experiences you will have during a Galapagos Cruise! Our ship has 50 cabins for 100 passengers and a crew of 58 – BUT we are only going to use 24 of the cabins for a total of 48 passengers. There are more crew members on the ship than passengers. There will be no waiting in line for others to return before it is your turn to go ashore. To make it even better, we will split into 4 groups of approximately 12 passengers per small group for shore excursions. Each group will have their own experienced National Park Guide. Our National Park Guides will travel with us on the ship and be with your small group each day. With us you will see more and experience more!

We have not included any inside cabins for our cruise, our price includes Premium Cabins with a window. For your best experience of Galapagos, we recommend reserving one of our 11 suites with a balcony. Pictures of the different cabins can be found below.

The Galapagos Islands are not the only stunning places to visit in Ecuador. The other most important area to visit is Quito, where we will be staying in the 5-Star Luxurious J.W. Marriott. Your visit to the equator and Parque Nacional Cotopaxi Park from Quito will add highlights you will remember forever! This is your last opportunity!!! While the Coronavirus was at its height of decimating all cruise lines – we were able to negotiate a fantastic deal for our passengers – the Charter of the full ship while only allowing 48 passengers. Now that the cruise line believes Covid is not going to be as big a problem in the future, the cruise line is no longer willing to give us what we need, related to full charters. We have parted friends, but will no longer be chartering Galapagos cruise ships. The GREAT news is – THAT DOES NOT AFFECT OUR 2023 FULL CHARTER!!! If Galapagos is anywhere on the list of places you want to experience – then Galapagos needs to move to the top of the list in 2023!!!! We have the best Galapagos Cruise, with a small number of passengers AND with Michael Wilcox as your educator – it can’t get any better than this!

*Per person cash discount price, based on double occupancy.
Does not include international airfare or visas.

Important Note Regarding The Two Itineraries: The tours in the Quito area and Cuenca area, including the train, will be the same; they will just happen in a different order. However, Celebrity Cruise has designed two different itineraries to the Galapagos Islands – a northern route and a southern route. BOTH are great itineraries. There is so much to see in the Galapagos that they had to create two itineraries. We have not included a lot of details on our land portion as we are still working on them. BUT, we have included in detail Celebrity’s two cruise itineraries. Both will be great, but if you want to read each itinerary before deciding, then do it reasonably fast, as we expect both sailings along with choice of cabins will sell fast!!!  Remember that all Itineraries on land and sea are always subject to change.

*Please understand because of the wild nature of these animals we cannot guarantee the sighting of any specific species.

Day 1: Nov 24: Fly to Quito
Upon arrival, transfer to your hotel at the airport. Tomorrow morning you fly to Galapagos.

Day 2: Nov 25: Fly to Galapagos Baltra Island
This morning we will transfer from our hotel to the Quito Airport to catch our included nonstop flight from Quito to the Galapagos Islands. Upon arrival, we will start our touring of Baltra Island before boarding our ship around 3 pm.
Baltra Island: During World War II, Baltra served as a U.S. military base protecting the Panama Canal from enemy attack. Now the cactus-strewn landscapes of Baltra are home to the region’s main airport.
Black Turtle Cove, Santa Cruz Island: A zodiac ride into Black Turtle Cove brings you up close to the quiet wonders of the Galapagos. Once inside the cove, we’ll quietly explore the area looking for sea turtles, several species of rays, and sharks.

Day 3: Nov 26: Galapagos Cruise
Our shore excursions today include the island of Rabida and Egas Port, on Santiago Island:
Rabida Island is a small island south of Santiago, Rabida is best known for its red sand and eroded volcanic landscape. A nesting colony of pelicans makes its home here, along with sea lions and some sea birds.
Egas Port, Santiago Island: With its black sand beach, coastal tide pools, and blue-water grottoes, this stop offers a wonderful taste of the Galapagos and the opportunity to see shore birds, Galapagos Hawks, sea lions, marine iguanas, and Galapagos fur seals. Sea lions, colorful tropical fish, and sea turtles are often seen while snorkeling.

Day 4: Nov 27: Galapagos Cruise
Our shore excursions today include Tagus Cove on the Isabela Island and Espinoza Point on the island of Fernandina:
Tagus Cove Isabela Island: Historically, an anchorage for pirates and whalers, this site offers a breathtaking view of Isabela, its volcanoes, and spectacular Darwin Lake. Along the shore, seabirds, penguins, sea lions, sea turtles, and nesting flightless cormorants can often be found.
Espinoza Point, Fernandina Island: Fernandina is the youngest island in the Galapagos and, as Darwin wrote, it is “covered with immense deluges of black naked lava.” Along with its extraordinary black lava rocks, this point of land hosts the largest colony of marine iguanas in the Archipelago, along with sea lions and a nesting site for flightless cormorants.

Day 5: Nov 28: Galapagos Cruise
Our shore excursions today include Urvina Bay on the island of Isabela and Vicente Roca Point on the island of Isabela:
Urvina Bay, Isabela Island: Composed of five coalesced volcanoes, Isabela is the largest island in the Galapagos and the most recently active, the latest eruption having occurred in 2015. Here we will see large land iguanas, finches, and if lucky, a giant tortoise or two. In 1954, the intrusion of magma below one of the island’s volcanoes caused part of the bay to be uplifted some 6 meters, and today we can walk through the remains of what was once a thriving underwater reef.
Vicente Roca Point, Isabela Island: The half-collapsed remains of an ancient volcano make for a spectacular setting at this site. Awe-inspiring cliffs, blue waters, and wildlife create a zodiac ride to remember as we search for sea turtles, penguins, fur seals, the flightless cormorant, marine iguanas, marine mammals, and the oddly shaped form of the elusive sunfish.

Day 6: Nov 29: Galapagos Cruise
Our shore excursion today includes Bartolome Island and Las Bachas, Santa Cruz Island:
Bartolome Island: Bartolome Island hosts one of the region’s most often-photographed views and a spectacular geologic setting. Its barren moon-like volcanic landscapes, spatter cones, and pinnacle rock makes for a unique stop. It is also home to the Galapagos penguin and provides an excellent opportunity for snorkeling.
Las Bachas, Santa Cruz Island: A beautiful white sand beach on the northern coast of Santa Cruz Island. The name “Las Bachas” comes from the mispronunciation of the word “barges” by the local population during the 1950s when WWII barges broke their moorings and ran aground on the beach. This is also one of the largest nesting areas of the Pacific Green Sea Turtle in the Galapagos. A short beach walk brings you to a pond to look for flamingos and other shorebirds. Afterward, this is a fantastic beach to relax, go for a walk, swim, and maybe practice snorkeling.
Daphne Major: Daphne is a satellite volcanic cone located north of Santa Cruz Island. The crater floor is an important breeding site for blue-footed boobies. The cliff shore of the island is home for sea lions, pelicans, blue-footed boobies, and tropical birds, which can be observed during the circumnavigation of the island.

Day 7: Nov 30: Galapagos Cruise
Our shore excursion today includes El Barranco on the island of Genovesa and Darwin Bay on the island of Genovesa:
El Barranco (Genovesa Island): El Barranco, also known as Prince Philip’s s after the prince who visited in 1965 and again in 1981, is a steep stairway that leads up through a seabird colony full of Nazca and red-footed boobies. Once visitors reach the plateau, the trail continues inland and passes more nesting booby colonies in the thin Palo Santo forest.
Darwin Bay (Genovesa): Darwin Bay’s soft white sand is only the beginning of a spectacular excursion. A trail from the beach takes you into lush mangroves where red-footed boobies nest. Other local wildlife includes sea lions, swallow-tailed gulls, frigate birds, and more. Snorkeling is a must here, as the nutrient-rich water attracts all types of marine life, including sharks, sea lions, sea turtles, and the occasional manta ray. Excursion options: Walk, swim, snorkel and kayak.

Day 8: Dec 1: Galapagos Cruise
Today is a full day tour at Puerto Ayora on the island of Santa Cruise:
Puerto Ayora Santa Cruz Island: This is the main population center of the islands, and home to the National Park Service tortoise-breeding center and the Charles Darwin Research Station. You will be able to visit the tortoise-breeding center and walk through the Charles Darwin Research Station.

Day 9: Dec 2: Baltra Island – Quito
Today we will head to the airport to await our flight back to Quito. Upon arrival, we will transfer to our 5-Star Luxury Hotel in the afternoon with some time to relax and enjoy your hotel.

Day 11: Dec 4: Quito – Equator – Quito
Today we will spend time on the Equator. It is amazing how water spins different a few feet apart from one side of the Equator line to the other. Upon returning to Quito we will fly late evening back to the US and home. (No hotel included tonight).

Day 12: Dec 5: Quito – Home
This morning we will catch our connecting flight back to our home cities.