Why NOW is the Time!

Jim and Carol Tyndall, along with Jamie, their daughter (all owners of Fun For Less Tours), were able to experience this fantastic part of the world on a private train. At the time, the train only visited 3 Stan Countries: Kazakhstan, Uzbekistan & Turkmenistan. The train did not visit Tajikistan or Kyrgyzstan. Knowing the train missed the countries of Tajikistan and Kyrgyzstan, they went in early to explore the areas the train missed. Even though they had all traveled to over a hundred countries, they knew almost nothing about Central Asia and its history of the Silk Road. To say they were overwhelmed with the ancient beauty and their people – would be an understatement. Jamie felt it was the best trip she had taken anywhere in the world. To Jim and Carol it shot right up near the top of all the places they have ever visited. After the trip, they agreed to charter the whole train for our groups – BUT, they needed to redesign the trains itinerary and needed to add the countries of Tajikistan and Kyrgyzstan. A train is not like a bus that you can just take a different road, pull over almost anywhere and stop or park. Getting permission to travel by rail, wanting to stop and park your train like a bus is not easy. It took close to a year of working with all of the governments and local train companies to get permission to change our itinerary and add the additional two Stans – Tajikistan and Kyrgyzstan, The only reason this is possible, is because we are chartering the whole train, changing the itinerary, and adding additional nights on the train.

A few things to consider:

If you want to experience one of the most unique and exotic tours in the world, while traveling on luxury train – this needs to jump to the top of your list. No other tour in the world can deliver what this tour does. 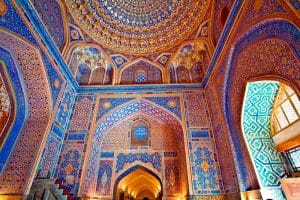 Central Asia (The Heart of the Silk Road)
The Silk Road brought riches to Central Asia, which was used to create some of the most beautiful buildings in the world. The best way to describe Central Asia’s Architecture is Unique, Majestic and Breathtakingly Beautiful.
In Samarkand alone there were billions upon billions of tiles used to create some of the most beautiful structures in the world – found on the previous two pages is one example of work that dates back to the 1400’s. Central Asia’s Architecture is not only beautiful on the outside it is also unique and beautiful on the inside!! 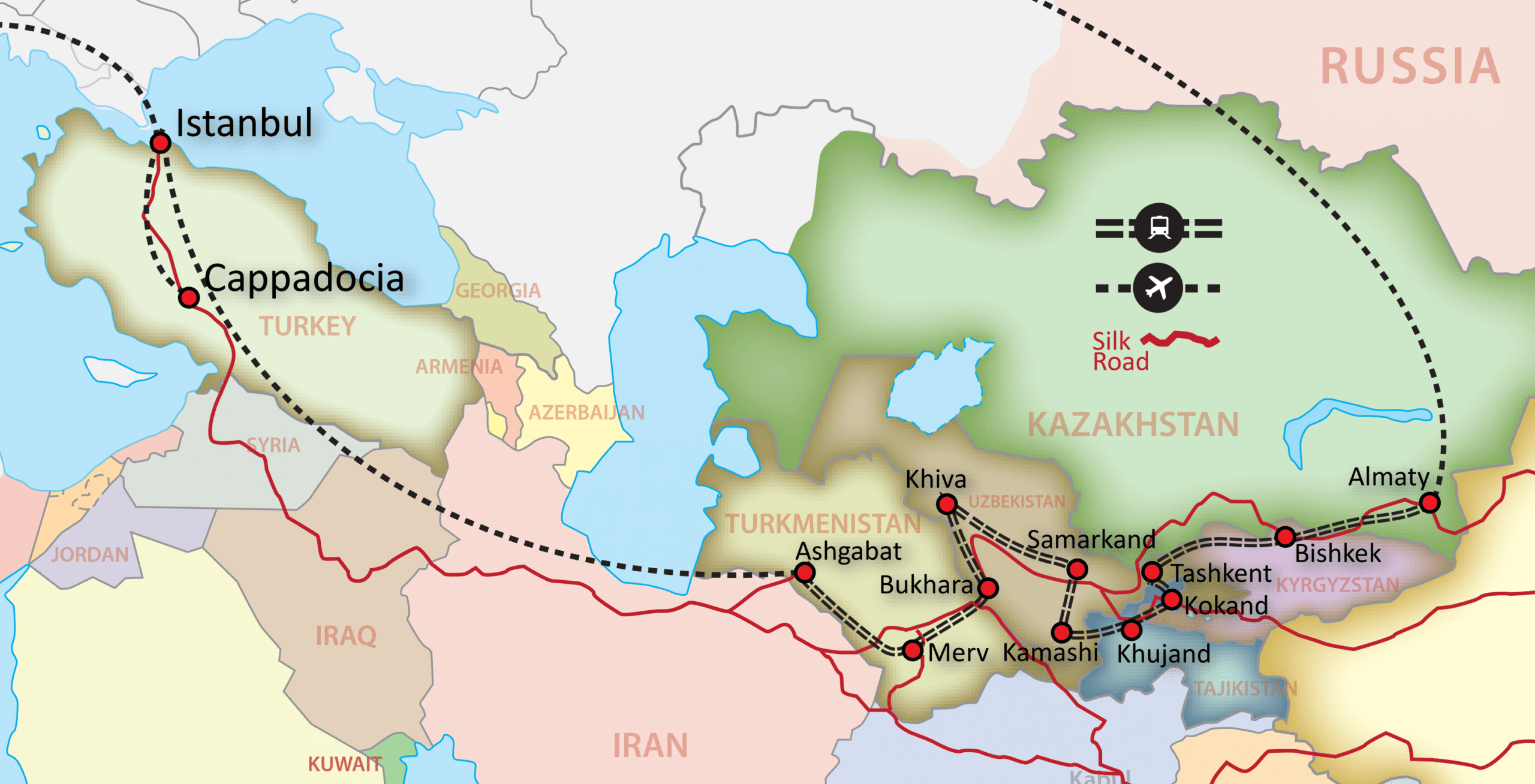 **Per person cash discount price, based on double occupancy. Does not include Domestic or International airfare, visas and tips.

Note: It is only a partial list as we are still working on making sure we will see what is most important. Like all of our tours, the itinerary is subject to change as we find ways of improving the itinerary!

Day 1: September 15: Fly to Istanbul
Fly from the U.S. to Istanbul Turkey.

Day 2: September 16:  Istanbul
Upon arrival into Istanbul transfer to your hotel

Day 3: September 17:  Istanbul
Our tour today will include the magnificent Hagia Sofia, Hippodrome, and the stadium of ancient Byzantium, where an Egyptian obelisk and bronze sculpture of the entwined serpents from Delphi still survive. We then continue on to the Blue Mosque which owes its name to the exquisite tiles adorning its interior. In the afternoon, we will visit the amazing Topkapi Palace, which from the 15th to the 19th Century was the principal residence of the Ottoman Sultans. Overnight Istanbul.

Day 5: September 19: Cappadocia
Experience the otherworld “fairy chimneys” – tall cone shaped rock formations and the underground cities and we do mean cities underground.  At times thousands lived underground in caves that could be blocked off from outsiders and those that would hurt them.  It is all a huge highlight.  Overnight Cappadocia.

Day 6: September 20: Fly to Istanbul
Midday we will return to Istanbul – afternoon we will tour on our way to our hotel.  Overnight Istanbul.

Day 7: September 21 : Ashgabat (Turkmenistan)
We will start the day with a boat ride on the Bosporus, the water that separates Asia from Europe. Istanbul is both in Asia and Europe. This afternoon we will spend time shopping and we do mean shopping.  The Grand Bazaar is one of the largest in the world, with 4,000 shops.  This evening we fly to Ashgabat arriving after midnight. Upon arrival into Ashgabat, you will be greeted and transferred to your 5-star luxury hotel.

Day 8: September 22: Ashgabat (Turkmenistan)
This morning we will drive to the ancient Parthian city of Nisa. We will then head back to the White Marble City of Ashgabat. The city is absolutely impressive, nearly everything is constructed of white marble. It has been compared to a Hollywood-style movie set. Everything is perfect spotlessly clean. We will overnight again in our 5-star Luxury hotel.

Day 9: September 23: Ashgabat – Merv, The Pearl of the East (Turkmenistan)
This morning we will board our chartered deluxe private train and depart for the UNESCO World Cultural Heritage Site of Merv, the remnants of what was once one of the world’s largest and most magnificent cities before being destroyed by Genghis Khan. The initial impression is disbelief, gigantic walls and ramparts simply standing in the middle of the desert next to the impressive ruins of ancient buildings such as the Tomb of Sultan Sanjar, the Maidens’ Castle (Kyz Kala), the historical ice-houses, and other tombs. Then we will return to the train to travel through the night to Bukhara.

Day 10: September 24: The City with a Desert Lighthouse (Uzbekistan)
Located in the middle of the Kyzylkum Desert, Bukhara has nearly a thousand architectural monuments recalling the golden age of the Great Silk Route. Exotic spices, furs, especially silk, were stored and traded in the city’s caravanserais. In Bukhara’s Old Town (a UNESCO World Heritage site), you see the almost fifty-meter tall Kalyan Minaret and Lyab-I Hauz Ensemble by the pond. You will spend the night in a 3-star First Class Hotel in Bukhara.

Day 11: September 25: Bukhara, The Noble One (Uzbekistan)
Bukhara, which also bears the name Sherif (the noble one), has preserved its ancient oriental countenance in its extensive, unparalleled collections of authentic architecture. In the morning, we drive you to the splendid Mir-i Arab Madrasah and the Samanid Mausoleum, one of Central Asia’s most beautiful architectural treasures. Afterwards, you will tour the massive Ark Citadel, a city within a city that was once the seat of government of Hukhara’s former rulers. There you view the throne room, after which you visit the last Emir’s Summer Residence. We will spend the night on the train.

Day 12: September 26: Khiva, a Tale from 1001 Nights in Stone (Uzbekistan)
After breakfast, your train will have arrived at the southern extent of the Zhetysu (seven rivers) landscape, at the oasis of Khiva. Standing at the mighty town wall with its gates and bastions of mud brick, you feel transported into another world. Life still pulses around the base of the Kalta Minor Minaret, just as it did in former times. Your tour allows you to take in the atmosphere and sights of the oasis. Its palaces, mosques, minarets, mausoleums, and madrassas (Muslim religious schools) represent some of the best-preserved examples of oriental town architecture from medieval times. You enjoy lunch in the former emir’s Summer Palace. Your private train leaves for Khujand (Tajikistan) in the late afternoon.  Overnight on board.

Day 13: September 27: Khujand  (Tajikistan)
In the morning we will visit the Shaikh Muslihiddin Mosque, along with the Arbob Palace and the Payshandba Bazaar (the biggest Bazaar in Tajikistan). We will also visit the “Tajik Sea” a large lake just outside of town. This afternoon we continue eastbound to Samarkand. Overnight on board.

Day 14: September 28: Samarkand, the Crossroads of Culture (Uzbekistan)
Today is spent visiting the sights of this famous historic city, which during the rule of Timur was considered the most beautiful and prestigious city in the world. The Necropolis of Shah-i-Zinda (the living Shah), the excavation sites at Afrosiab (with a museum tour) and the staggeringly beautiful Registan Square are certainly among the most notable architectural sites in all of Central Asia. It is also historically important as the site where many Uzbek women burned their veils (paranjas) in 1917, to signal their arrival in a new era. The night is spent in a 4-star Deluxe Samarkand Hotel.

Day 15: September 29: Samarkand, the Magnificent (Uzbekistan)
Your day in this fascinating city includes a tour of silk carpet manufacturer, a visit to an Uzbek craftsman’s family to see paper being made from mulberry bark, stops at the Ulug Beg Observatory and the ruins of the Bibi Khanum Mosque and viewing the interior of the palace-like Gur Emir Mausoleum. You spend a second night in your Samarkand Deluxe Hotel.

Day 16: September 30: On the Great Silk Road to Shahrisabz
Today you enjoy an excursion to the surrounding mountain region, where fire worship and shamanism are still practiced in the form of rituals and myths seldom found elsewhere. A traditional ceremony offers you first-hand insight into the region’s unique folklore and you have the chance to experience the daily life of the local residents. Aboard your train, you then continue along the Great Silk Road to Timur’s birthplace, the green city of Shakhrisabz (a UNESCO World Cultural Heritage Site). Here you will see monumental architecture of the Mongol ruler’s Great Palace from the fourteenth and fifteenth centuries. In the evening you depart to Tashkent on your private train.  Overnight on board.

Day 17: Oct 1: Tashkent, the Green Oasis (Uzbekistan)
In the morning your private train arrives in the Uzbek capital of Tashkent. Your sightseeing tour of the city offers a closer glimpse of this green oasis in the steppe. You see the Madrassa Kukeldash, the Kavoj and Amir Timur monuments, and the typical Kazakh mud brick houses. In the evening you attend a concert in a music hall (programme permitting). Afterwards your train departs for Kyrgyzstan.  Overnight on board.

Day 18: October 2: Bishkek (Kyrgyzstan)
After breakfast you arrive in the city of Bishkek, the capital of Kyrgyzstan. After an overview of the city you will visit the Ala Archa National Park where you will enjoy a picnic (weather permitting) and a Kirghiz folklore performance (to be confirmed). In the late afternoon, your Private Train will travel through the gorges of the Tien Shan Mountains to Almaty in Kazakhstan. The border formalities are handled easily in your compartment.  Overnight on train.

Day 19: October 3: Almaty, The Father of the Apple
Your train arrives in Almaty after lunch. A sightseeing tour of the city offers you an impression of this green metropolitan city at the foot of the mighty Ile Alatau Mountains. You see the imposing Zenkov Russian Orthodox Cathedral built entirely of wood, the Wedding Palace, the Almaty Circus, and the Central Mosque. That evening you are served a tasty dinner in a traditional Kazakh yurt. Overnight/day room (depending on time of departure flight): Royal Tulip. 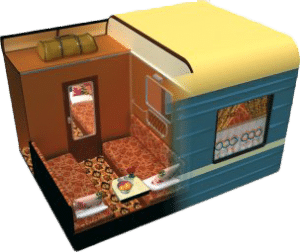 Aladdin Cabin
The price of the tour includes the Aladdin cabins. Aladdin cabins have two lower beds, plus a small table and storage space. The Aladdin’s do not have a toilet or shower connected to their room. There is a Large Shower compartment down the hall that can be scheduled for use by those in the Aladdin, there is also a western style toilet and sink located down the hall that is available to use when not in use by others.
* The price of the tour includes the Aladdin Cabin Category 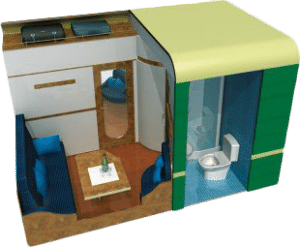