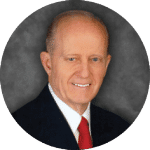 Dr. John M. Madsen is a former associate professor of Ancient Scripture at Brigham Young University. He has participated in 9 tours to the Holy Land before being called as a General Authority. Dr. Madsen has led many tours to Israel since being granted Emeritus status. We don’t just send a name, with no experience, we send the best in Educators and those with the most experience!

Dr. Madsen is an emeritus member of the First Quorum of the Seventy of The Church of Jesus Christ of Latter-day Saints (LDS Church). He has been a general authority of the LDS Church since 1992.

Assignments that Dr. Madsen has had as a general authority have included serving as president of the Mexico North Area of the church, and in the presidency of the North America West, North America Northwest, Philippines, and Australia/New Zealand areas.