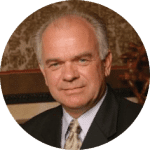 Brother Christensen was born in Richfield Utah. He became an Eagle Scout. He served a mission in the Alaskan-Canadian mission. He served in the Utah Nation Guard as an Officer in the Artillery Married Rozann Beck from Gunnison, Utah. They have six children and 16 grandchildren. He graduated from Snow College, Weber State College and received his masters and Ph.D. in Marriage and family therapy from Brigham Young University. He was a therapist at Provo Canyon’s Boys School and has treated many adolescents for ADD, ADHD, incorrigible, rebellious, depressed, anxiety and family problems. He has had a private practice in marriage and family, couples and individual therapy for over 40 years.

He has taught in the church educational system for 25 years. He taught Release Time Seminary, served as a seminary stake coordinator in Alaska and Colorado and directed the Institute of Religion in Boulder Colorado. He taught on the Religion Faculty at Ricks College and was the institute director at the Sandy Institute of Religion in Salt Lake, and as an institute instructor at the University of Utah, he has trained many volunteer Institute teachers. He has taught Missionary Preparation classes for over 20 years. He has since retired from the Church Educational System.

He became a Corporate Trainer for VitalSmarts Corporation. He is currently doing Individual, Marriage and Family Therapist and is the Director for Maximum Potential and Bingham Creek Counseling in West Jordan. He deals with struggling, marriages, depression; anxiety and other emotional and mental issues. He has developed an online Pornography Recovery Program, called “Candeo”, reaching over 50 countries. The program has proven to work in helping men and women overcome addiction to pornography and sex addiction. He has spoken at many professional conferences and community programs.

He recently published a book “What Grandpa Taught about the Law of Holiness”. He has published 14 talk tapes and speaks at many youth conferences, BYU Education Week and Know Your Religion programs. He and his wife directed tours for BYU Travel Study to Israel and Central America for many years.

He has served as a Bishop and was in the District Presidency in Juneau Alaska, working with the Y.M. program, he served on several different High Councils and has been the Stake Mission President for two different Stakes. He has held almost every position, except Relief Society President, He turned that calling down. He has served as an ordinance worker in the Jordan River Temple. He is also the Stake Sunday School President in the Westland Stake, training “Come follow Me” teaching to not only the youth instructors, teachers, but for H.P, E.Q. R.S. and S.S. Instructors. He and his wife served a mission at the Heber Valley Girls Camp.