Where the Gospel Begins, Your Traditions Must End! 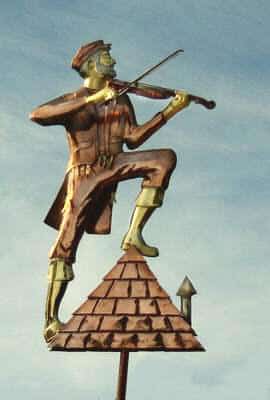 All religions struggle with finding a balance between core values and acceptable traditions. As you travel around the world, you will see how all religions are entrenched in traditions. Whether it is a Christian church, a mosque, a synagogue, a Buddhist or Hindu temple the challenge is the same. Some traditions are good, but many traditions are not, and the original principle upon which the tradition began has been lost in a foggy maze of ritual. Like Tevye, in Fiddler on the Roof, his answer to why was “Here in Anatevka we have traditions for everything… how to eat, how to sleep, even, how to wear clothes. For instance, we always keep our heads covered and always wear a little prayer shawl… This shows our constant devotion to God. You may ask, how did this tradition start? I’ll tell you – I don’t know. But it’s a tradition…” When you travel to Europe, the Holy Lands of the Mideast, or to Egypt and visit the many Christian churches which are centuries old, think of the difficulty of establishing a new religion among the entrenched religions of the time of Jesus and the early apostles.

The early Christian churches were a challenging mix of Jewish and Gentile converts. Each group brought with them the traditions of their fathers. In the New Testament letters the apostles would salute the Jews and the Gentiles with a separate greeting. Peace (Shalom) was, and still is, the salutation of the Hebrews, while “grace” was the appropriate greeting among the Greeks. The dominant culture of the first century A.D. was heavily Greek, even during the time of the Roman Empire. Paul began his epistle to the members of the Church at Rome with “Grace to you and peace from God our Father, and the Lord Jesus Christ” (Romans 1:7). Similar greetings are found in I Cor.1:3, 2 Cor. 1:2, Galatians 1:3, Ephesians 1:2, Colossians 1:2, and in all of Paul’s letters except when he wrote to the Hebrews. Ist and 2nd Peter, 2nd John 1:3 and the Book of Revelation 1: 4 all include this attempt to acknowledge these two separate cultures. Greeting each segment of the new church was only the tip of the iceberg as it related to their differences.

Christianity was not the Pharisaical Judaism of the circumcision and the Law of Moses. It certainly wasn’t the pagan worship of the Greek and Roman gods. These two influences were a constant pressure on the young Church. Each convert to Christianity wanted to continue with the traditions in which each was raised. One of the first challenges introduced by the Hebrew converts was the fact that Gentiles could even be members of the Church. The idea that Jesus was a universal Messiah and not just the Messiah of the Jews was a difficult doctrine for Jewish converts. Accepting that Gentiles could be members of the congregation certainly would not exempt the male gentiles from being circumcised or would they be?

The controversy over circumcision discussed in Acts 15, resulted in the first known letter of the apostles in which were defined the requirements for membership in the new Church. “For it seemed good to the Holy Ghost, and to us, to lay upon you no greater burden than these necessary things; That ye abstain from meats offered to idols, and from [drinking] blood, and from things strangled [as sacrifices to pagan gods], and from fornication; from which if ye keep yourselves, ye shall do well. Fare ye well.” (Acts 15:28-29)

The basic message of Christianity was and is to love God and to love our fellow man. Most religions hold similar values. Anything that detracts from “loving” objectives regardless of dearly held practices and customs have to be discarded. The message of Jesus was clear, where the Gospel begins, your traditions must end.