The One Place In England I Must Always Visit 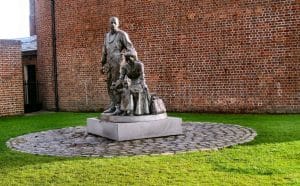 I have been thinking of writing about England for some time now, but I love the country so deeply that it has been difficult to focus on a single place to begin, so I keep putting it off. I am sure in the future there will be time and space to express gratitude and respect for all this “sceptered isle” gave to me by way of a legacy. Its history and its literature have been part and parcel of my soul’s furniture for as long as I can remember. Its landscapes and cobblestoned villages, its castles and cottages have enriched my imagination and peopled it with characters as diverse as King Arthur and Ebenezer Scrooge. All my memories of England bring a smile and a welcoming invitation at reflection. So many gifts did God allow this island nation to bestow upon the world that I will inevitably be drawn out into pleasant reverie for hours. So—where to begin? Perhaps, at the ending place would be best.

Among all the vistas that linger through my mind one always returns with a poignancy and vividness that is tinged with irony. It is a place in Liverpool along the Mersey River where so many thousands of our ancestors took their last loving look at the England of their youth before setting sail into the Atlantic and America. I know what it is like to sail into New York Harbor and see that sentinel of freedom, that lovely lady of liberty holding her torch for the “teeming masses.” This was their first view of their new home, but what of the last view of their old one? Somehow, the Albert Docks fill the holding places of my heart with equal tenacity and I feel the sacredness of so very many goodbyes that still seem to echo across the river’s water and among the brick buildings that once framed the tall-masted ships with their white canvas catching the first winds from the East.

An English friend once gave me an 1844 half farthing as a memorial to all the poor British saints that saved, sometimes for years, the tiny coins, one by one, until they had enough to buy their passage to Zion. It is worn and smoothed by many fingers as it passed from hand to hand through the years. Now it rests in my own. I carry this coin with me when I go to England and finger it softly as I walk the dockside. It takes me back into the past and I can see it all as if it were my own memory, my own farewell—the ship resting securely moored to the riverfront, trunks and cloth bundles waiting to be loaded stacked pell-mell along the wharf, sacks of grain swinging precariously above the deck, sailors climbing the rope ladders and along the yardarms rhythmically moving to the music of their shanties. Everywhere there is bustle and hurry and business and excitement. I can hear the sounds of the loaded carts shaking along the cobblestones groaning under the burden of each families precious belongings, taste the warm freshness of scones pedaled in the streets, feel the rope roughness of the ships rigging stretched taut against the sails, smell the salt sea breeze coming off the Atlantic and up the river, see the fading evening light which heralds that last sacred day in England. Candles are flickering throughout the city and the ship’s lanterns sway on the night air as the stars blink into life over Liverpool Cathedral. There is homesickness in the air, yet there is also the call of the new land and all its promises.

Then there are the people. Mothers clutching the hands of tiny children fearful of losing them in the rush of hurried preparations, fathers firm faces trying so hard to hide their own anxieties and be strong for their families, young men huddled in tight masses speaking knowingly of what they do not really know, girls looking in the shop windows for that final stretch of ribbon or English lace to bring a memory of Europe to the log cabin wilderness into which they go. There is excitement, wonder, laughter, tears, longing and love washing across the riverfront, baptizing the red brick of the warehouses that still stand silently today as if they knew that they had witnessed God moving among his children directing them to a new world, new lives, new hopes. Were they not engaged in His work and was He not pleased with their sacrifices?

Some years ago, I also boarded a three-masted tall ship at the Albert Docks and sailed down the Mersey River. The fates were kind to me and I drew the position at the wheel. I steered a course straight down the river. The tide pulled the ship towards the Atlantic as the sails filled with the winds of England, a parting gift from the island that has become almost my own home. It seemed that all the hopes and dreams of tens of thousands sailed with me that evening. I looked back at the docks and could still see, over a century and a half later, the ghostly waving hands and handkerchiefs of loved ones left behind whose faces and voices our ancestors would never see nor hear again, and I thought of the words of one of them, my wife’s great-grandfather, who stood on these same docks framed by these same brick buildings, and sailed down the quiet waters of the Mersey toward America.

“We left Liverpool on the 18th of May. Seeing my native land gradually sink into the horizon gave me a feeling of loneliness and uncertainty. I realized how dear it was; containing all that had given me a fullness of joy. Loving parents, the companions of my childhood, all my relatives, faithful friends, the land I revered, the ancient castles whose ruins I loved to explore, the stately mansions, splendid cathedrals, green lanes, cozy cottages, the hills and vales, green fields and fragrant gardens ran through my mind. My path was separating us by an ocean, a continent, perhaps forever.”

Yes, I must begin at this ending-place when I write about England, for it is here along the banks of the Mersey River with its quayside memories that all that is dear about England rises to the surface and I begin to understand the sacrifice of those who went before me and bequeathed to me and my children—ah the loveliness of Zion—but at the price of the majesty of England.