Joseph Smith and The Spirit of Revelation 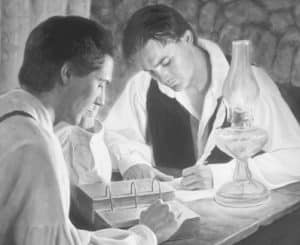 What was it like to be there and witness Joseph Smith receiving revelations? Brigham Young was a witness and said this, “those who were acquainted with [the Prophet Joseph] knew when the Spirit of revelation was upon him, for his countenance wore an expression peculiar to himself while under that influence. He preached by the Spirit of revelation, and taught in his council by it, and those who were acquainted with him could discover it at once, for at such times there was a peculiar clearness and transparency in his face.” (Journal of Discourses 9:89)

Mary Elizabeth Rollins as just a girl was also a witness. She left this description of events in February 1831.
“Joseph got up and began to speak to us. As he began to speak very solemnly and very earnestly, all at once his countenance changed and he stood mute. Those who looked at him that day said there was a search light within him, over every part of his body. I never saw anything like it on the earth. I could not take my eyes off him; he got so white that anyone who saw him would have thought he was transparent. I remember I thought I could almost see the cheek bones through the flesh. I have been through many changes since but that is photographed on my brain. I shall remember it and see in my mind’s eye as long as I remain upon the earth.

He stood some moments. He looked over the congregation as if to pierce every heart. He said, “Do you know who has been in your midst?” One of the Smiths said an angel of the Lord. Martin Harris said, “It was our Lord and Savior, Jesus Christ.” Joseph put his hand down on Martin and said: “God revealed that to you. Brethren and sisters, the Spirit of God has been here. The Savior has been in your midst this night and I want you to remember it. There is a veil over your eyes for you could not endure to look upon Him. You must be fed with milk, not with strong meat. I want you to remember this as if it were the last thing that escaped my lips. He has given all of you to me and has sealed you up to everlasting life that where he is, you may be also. And if you are tempted of Satan say, ‘Get behind me, Satan.’”

These words are figured upon my brain and I never took my eye off his countenance. Then he knelt down and prayed. I have never heard anything like it before or since. I felt that he was talking to the Lord and that power rested down upon the congregation. Every soul felt it. The spirit rested upon us in every fiber of our bodies, and we received a sermon from the lips of the representative of God.”

(http://ldshistory.us/pc/merlbyu.htm)
And thus are the accounts of those who witnessed for themselves Joseph Smith receiving revelations such as are found in the Doctrine and Covenants.