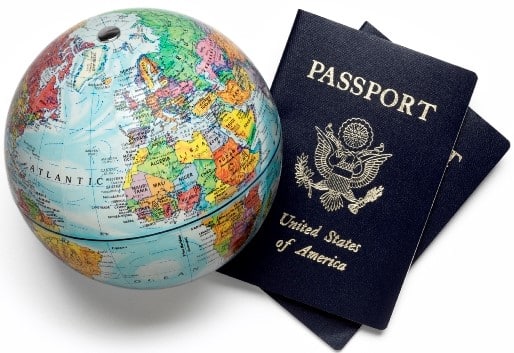 It was a Saturday afternoon, the mail lay waiting on the kitchen counter. I saw the slightly thicker envelope topping the pile addressed to my daughter-in-law. When she came in the door my wife casually said to her, “There’s a letter for you, Carolyn, you may want to open it.” She looked at it and read the return address—U.S. Passport Office….. Picking it up somewhat breathlessly she broke the seal. Holding her first passport in both hands she said with almost reverent awe, but with a voice bursting with excitement and tinged with a measure of joyful disbelief: “I have a passport! I have a passport!”

For such moments I live. We travel for many reasons, but prime among them is the opportunity to watch our children thrive in the atmosphere of another country, among other peoples. Most people who travel carry their cameras, snapping shots with each new locality. We too bring our digital memory cards, but the most precious stored images are those held in our minds not those captured in the electronic world of gigabytes. They are the memories, savored and relived when the tour is long past of connections made between those I love and that broad, wide, wonderful world of which we are all citizens. These are moments that can never be captured by the limited focus of a lens.

We took our children on a journey from Palmyra to Winter Quarters. At that critical stop in Carthage my nine-year-old son shared in the collective memory of that sultry June day in 1844; heard as if he had lived it, the hopeful sadness of “a poor wayfaring man of grief,” then the noises of the mob, the rush to the door, the gunshots, the final words, and the troubled silence of the summer rain on the grass below. I found him a few moments later outside lost in the poignancy of the moment, the love of Joseph forever sealed into his heart.

Perched on a cooler next to the driver’s seat in a bus in Guatemala another son, age 12, listened to the unceasing joyful banter of our driver Sergio. It was all in Spanish, of course, and our son couldn’t understand a word, but the feelings came through and a bond was created strengthened every day as the two became inseparable. He shared with him the colorful costumes of the Highland people, the farmers in their corn fields green with the summer rains and the women weaving by the lakeside. They saw the children peddling their tiny homemade crafts, smelled the tortillas warming on an outdoor grill, laughed at the antics of the spider monkeys—and my son’s spirit was enlivened. When we left, Sergio put his hand on his heart and patted it tenderly his dark eyes soft as he looked at my son and said, “Mckay, McKay. In here.” You can’t buy that kind of education for all the tuition in the world.

A few years later we walked with our daughter and son in law through the rainforest at Tikal whose pyramids wait hidden until that moment when the jungle clears and they tower above you in Mayan magnificence. Not one given to expressions of exhilaration or the use of the exclamation point my son in law stopped dead center in the trail looked up to the roof comb scratching the sky and said, “You’ve got to be kidding me!!!!!!” It was a six exclamation point sentence and we all laughed in the delighted uninhibited emotion of his wonder—the most excitement I had ever seen generated in this man of controlled and guarded enthusiasm.

There was that moment in the Louvre with my oldest daughter who took an Art History in college. She loved the painting by the Dutch master De La Tour titled “Christ with St Joseph in the Carpenter’s Shop.” De La Tour was a master of the contrast of light and dark and you can almost feel the warmth of the candle held by Jesus, it’s glow shining through his closed cupping fingers. We were running out of time and had not found this one painting she most wanted to see. We separated to broaden our search. At last, rounding a corner, there was our daughter transfixed before the painting tears flowing from her eyes. We said nothing. The silence confirming the truths imparted. And in my memory will always breathe that moment in the Sistine Chapel as my wife looked up to the central panel of Michelangelo’s ceiling. There was the Father cradling the yet uncreated Eve in the protective reach of his arm, the other extended in life-bestowing gift towards Adam who received the offered sacrament in trust and adoration. My wife’s head bent full back was unaware of the tears dropping down the side of her face wetting her hair and ears or the soft murmur of her voice.

There were the Chinese kites soaring above the deck of the ship bright against the cliffs of the Yangtze River and the soaking downpour on the Li as we vainly but laughingly ran for cover. Reading Wordsworth’s “Tintern Abbey” in the ruins that inspired it, listening to my father in law recount the Christmas story in Bethlehem, counting tropical fish on the Great Barrier Reef, walking in Red Square surrounded by echoes of the fading Cold War, an evening meal in a sidewalk café off the Piazza Navona in Rome, a son doing magic tricks with the children in front of the Pyramids, all rest comfortably in the holding places of my heart. It doesn’t seem to matter where or how far one travels, sharing it with family sanctions the recollections and embeds the feelings deep within.

The story is told of a guard at the Rijksmuseum in Amsterdam who was standing in his assignment next to Rembrandt’s “The Night Watch,” the museum’s most beloved treasure. He heard a visiting tourist comment, “I don’t see what’s so great about that.” “Ah,” replied the guard, “But don’t you wish you could.”

There is nothing quite as satisfying or so completely heart-healing as when your own child opens their eyes and sees. Then the earth is created anew, man’s dignity reborn, and the world seems a friendlier, more welcoming place, where all are lifted by all. “I have a passport! I have a passport!” But not one that simply allows us to visit other countries, but a passport to experiences that leave us and our families touched by the universal goodness scattered in a hundred thousand places across this earth—from pole to pole.