Palmyra, The Cradle of the Restoration 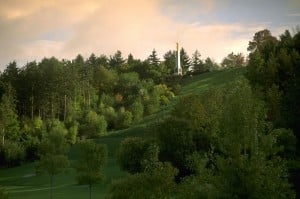 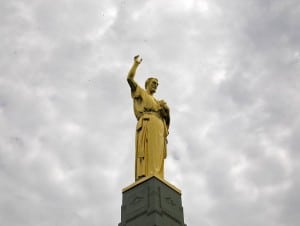 One of my favorite church historical sites is Palmyra, New York. As I’ve walked the streets and paths of this beautiful little town, I’m reminded of stories filled with joys and sorrows of those magnificent Mormons who contributed to her history.

In 1915 Willard and Rebecca Bean were called by President George Albert Smith to a five-year mission to establish a Mormon presence in a very prejudiced Palmyra. No Mormon had lived there for 85 years. That five-year mission extended to twenty-five years.

Along with being an excellent scriptorian and gospel debator, Willard had been selected because he had been a professional boxer; a skill that came in handy on several occasions.

“Brother Bean’s fighting abilities were spontaneously employed on an occasion as he walked along the unfriendly streets of Palmyra. A man watering his front lawn one afternoon suddenly turned the hose on Willard and taunted, “I understand you people believe in baptism by immersion.” The spry, athletic Willard reportedly vaulted over the fence separating them and replied, “Yes, and we also believe in the laying on of hands!” He then pummeled the man. (Willard Bean, “The Fighting Parson,” p. 14.)

After the tragic death of Joseph’s brother Alvin, ugly rumors were pasted throughout Palmyra accusing the Smith’s of digging up his body and selling it for dissecting. Grave robbers often dug up freshly buried bodies and sold them to medical schools for research and dissecting.

In an effort to stop the hurtful lie, Joseph Smith Sr. placed an article in the local newspaper, it read, “Whereas reports have been industriously put in circulation that my son Alvin had been removed from the place of his interment and dissected, which reports, every person possessed of human sensibility must know are peculiarly calculated to harrow up the mind of a parent and deeply wound the feelings of relations—therefore, for the purpose of ascertaining the truth of such reports I, with some of my neighbors this morning repaired to the grave and removing the earth, found the body which had not been disturbed. This method is taken for the purpose of satisfying the minds of those who may have heard the report, and of informing those who have put it in circulation that it is earnestly requested they would desist therefrom…”( The Wayne Sentinel, Wednesday, September 29, 1824)

If you go to Palmyra, make sure to  visit the Swift Cemetery, there you will see the burial site of Alvin.

Prior to the dedication of the Angel Moroni monument at the Hill Cumorah, Torleif S. Knaphus, the designer of the monument shared the following story with Rebecca Bean.

[Sister Bean] “Brother Knaphus told me as soon as he heard that we owned the Hill Cumorah, he started making sketches of what he thought an Angel Moroni monument and statue should look like. No one asked him to do this or knew what he was doing. After he had finished seven sketches, one evening all alone he climbed Ensign Peak which looks southward over Salt Lake Valley.

In the darkness of night he laid the seven sketches out on the ground and then he knelt in prayer asking the Lord if he had done the wrong thing. He asked the Lord to show him which one would be the right one to take to the Church Authorities, and if it was right and proper for him to even go to them.

When he opened his eyes there was a light all around him and he could see every one of the seven sketches, even though it was dark. And then he saw an angel pointing with his finger to the one that he [Brother Knaphus] thought was the best and heard the angel say, “This is the one.”

And then he asked, “How will I approach the Brethren? What will they think? Have I done the right thing to do this?”…The angel, said, “You go to the Church offices in the morning. They will be waiting for you.”

He went to the office; it was just like it had been planned. They were there and greeted him like they had sent for him. He laid them all out on the table and they looked them over and they, too pointed to the one that the angel had pointed to…

I said to Brother Knaphus when he told me this story—he came and stayed with us at the time it was to be placed on the hill—I said, “Was it the angel Moroni that came to you, Brother Knaphus?”  And he said, “Sister Bean, that’s my secret.” (BYU, Maxwell Institute, 2004)

Palmyra truly is the cradle of the restoration of the Church of Jesus Christ of Latter-day Saints. Here one is privileged to hear and see where these touching, inspiring and sometimes humorous events happened, among a simple people with an extraordinary dedication to their faith.