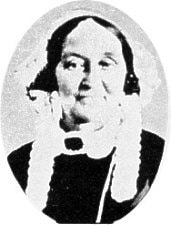 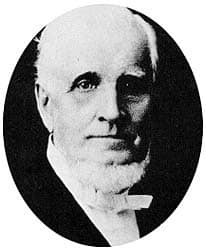 Nora was born October 6, 1796, at Peel, on the Isle of Man. Her father was the captain of a slave-trading ship, the Helen. Nora, however, was given a proper upbringing and became refined and well-educated. When she was just 14 her father was killed at sea while putting down a mutiny. In order to help support her family, Nora left home to work. In time, she joined the house of a Governor Smelt, the Governor of the Isle of Man. There she associated with many important people. She became good friends with a young woman who was married to the secretary of the newly appointed Governor of Canada, Lord Aylmer. When the Governor left for Canada, Nora’s friend asked her to accompany them. At first Nora refused, but as she was wont to do with such serious matters, she prayed and asked the Lord to help her find answers in her Bible. While praying, she opened her Bible at random and read the following, “Get thee out of thy country, and from thy kindred and from thy father’s house, into a land that I will shew thee” (Genesis 12:1). Nora became convinced that it was the will of God that she should make the voyage, and accordingly–May 1832–she left for the New World.

Nora settled in Toronto Canada. Once there she renewed her association with the Methodists, where she became acquainted with John, a young immigrant from England. John was a Methodist lay preacher and a man very devout. Both were seekers and soon they became friends. In time “John confided in Nora [a] revelation in his youth through which he knew he would preach the gospel in America, and it was a message of greater import and power than he then had.”

As her class leader, John soon found himself attracted to the slender and dark-haired Nora, who, at thirty-six, was mature, accomplished, charming, witty, and possessed all the attainments of a lady of culture. It was B.H. Roberts who would further describe her as “refined both by nature and education, gentle and lady-like in manner, witty, intelligent, gifted with rare conversational powers, possessed of a deep religious sentiment, and, withal, remarkable for the beauty of her person.”

John began to court Nora, but Nora wasn’t interested. “She thought him handsome but unpolished; he hadn’t been to the right schools nor attended a university; his intellectualism was flawed by gaps of the self-educated. Beneath the charm and humor crouched the tiger. He was a man who would always be involved in battles for principle. Would she want such a life?” She was not sure.

Notwithstanding her seeming reluctance, John proposed. She turned him down. There were other reasons for her coolness, not the least of which was Nora was 36 years old—John was 24.

Nevertheless, John was persistent, asking the Almighty to intervene with Nora on his behalf. Then, Nora experienced a dream in which she saw herself as John’s wife—and happy. She took it as a revelation from God and when John asked again, Nora accepted. They were married January 29, 1833.

Little could Nora know that the man she married on that day would himself become every bit as much a prophet as those she loved in her Bible—a man, renowned for his courage and intellect, who indeed would stand for principle like a tiger, and for those principles would be wounded at Carthage in 1844 and die in exile for his faith in 1887—John and Leonora Taylor.