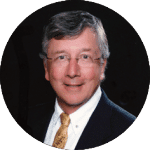 Site Of The Christmas Truce 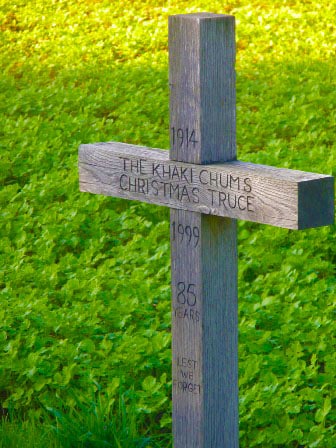 When you travel the world, take time to visit places that will touch your heart…

Just outside the small town of Ypres, Belgium is located a farmer’s field.   Marie and I  went looking for this farmer’s field in September of 2010.  What we saw was a field like all the others around it with neatly furrowed rows. The time of the season we visited meant no crops would be growing there.

But Marie and I did not go there to visit just a farmer’s field.  It was a place we both have always wanted to visit because it was here on December 25, 1914 that a modern miracle occurred.  It was here that entrenched enemies sat in the muddy earth opposite each other along what became known as the Western Front of  World War I.  It was here that opposing generals from the British and German lines became dismayed over their troops laying down there arms for a few days to celebrate Christmas together in a spontaneous gesture of peace and goodwill towards men.

The simple wooden cross that marks the site of the famous Christmas Truce symbolizes the Christian nature of what happened here.

By the time of Christmas Eve, 1914, World War I had already claimed thousands of lives since its beginning 5 months earlier.  The war was supposed to be over by Christmas.

Two of Queen Victoria’s grandsons, Kaiser Wilhelm of Germany, and King George of Britain were opposing monarchs leading their native sons into these trenches between Belgium and France.  In this humble farmer’s field trenches were dug by  British soldiers attempting to prevent German soldiers from entering deep into France.  Germans reacted by digging their own trenches and only “No Mans Land”  separated the two lines. The trenches that cut into this field and many others thru Europe snaked their way some 600 miles south from the English Channel to the Swiss border.

This field where Marie and I stood marked the spot where on Christmas Eve, 1914 the unthinkable happened.  Christmas music, sung by German voices, reached across “No Mans Land.”  Instead of shellfire, explosions, and the screams of wounded and dying soldiers, Scottish soldiers hear the sounds of “Stille Nacht, Heilige Nacht” thru the cold night Christmas Eve.  Glimpses were also seen of lighted candles and a Christmas tree.

One British soldier remarked, “It was all so strange, it was like being in another  world, to which he had come through a nightmare; a world finer than the one he left behind.  British soldiers were shocked to see their “dreaded enemy” celebrating Christmas.  After all, they were taught that the Germans were little better than pagans or savages.

But, yet, as Christmas day dawned bright this amazing miracle developed into truly an event for the ages.  Germans  wrote crude messages on boards and held them up for the British to see.  “You No Fight, We No Fight,” and “Happy Christmas!”  One brave German soldier was reported to have stood up in full view of the enemy pointing guns at him holding up a Christmas tree with lighted candles.

Soldiers on both sides eventually left their trenches to cross No Mans Land in a friendly exchange.  Kind words were spoken, hand shakes were common.  Gifts were traded and friendships made.  The miracle of the moment when both sides mutually decided to stop the war for awhile taught both the Germans and the English  how equal and human  they were.  The killing and hatred was forgotten.  One soldier took a photograph of the once enemies standing and smiling with each other.  Another soldier brought out a soccer ball and a friendly match developed.

The cross reads simply “Site of the Christmas Truce” 1914.  A fading Christmas wreath and deflated soccer balls help to remember the majesty of that moment long ago.

German and British generals heard of the truce and said “Such a thing should not happen in wartime.”  The truce lasted several days, not just one afternoon.  But eventually word came down from the generals that officers would be punished for allowing the truce to continue.  Eventually, random acts of violence ended the miracle and the baser nature of men resumed their ugly deeds.

But, for a short time, humanity was the victor.  Understanding, kindness, and a hidden urge for peace defied the wartime strategies and chaos that marks any war.  This Christmas truce was a celebration of the human spirit—the true spirit of Christmas,  never to be repeated in World War I  or any other.

A Scottish poet, named Frederick Niven, wrote a poem he called  “A Carol from Flanders Field.”  It reads:

From Flanders, kneel and say:

God Speed the time when every day

Shall be as Christmas Day.

Jeff Lawson and his wife Marie travel the world with Fun For Less Tours. 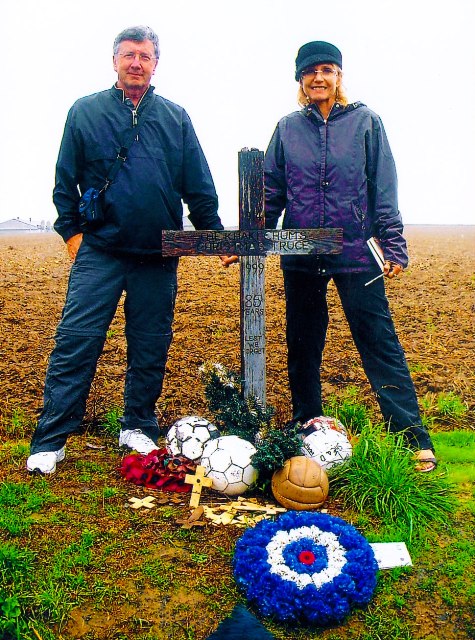